Poland's "Photos Worth a Thousand Words"

In Poland, I took several pictures that had stories that spoke for themselves and told a story of the culture within them. Whether it was the battle scars of Warsaw, the Solidarity Center in Gdansk, the Cathedrals in Gdansk’s Old Town, the legend of the dragon under Wawel Castle in Krakow, or the Gnomes in Wroclaw, each city had it’s photo that stood on it’s own.

Warsaw had reminders of it’s destruction and the horrors of the Holocaust everywhere, but it also had examples of it’s spirit. Apart from the original Ghetto walls, the stilts to represent the crossing bridge between the small and large ghettos, and monuments to victims like Janusz Korczak, it had monuments to those that resisted, showing the Polish will and fighting spirit. Two stood out: a monument to the 1944 Uprising itself and a monument to children in the Home Army. The Uprising’s monument is a battle scene with soldiers running across the main square of the Polish Supreme Court building. Two soldiers, a priest, and a mother with child on the other side of the square are said to be entering the sewers to traverse the city; but the civilian is being held back so that German soldiers won’t kill the civilian once she’s inside and block the entrance, while the Priest prays for and blesses the soldiers. The children’s monument stands in honor of child soldiers who smuggled aid into the Ghetto and was stylized to represent a child holding a German weapon, though, they were purely smugglers, never on the front line. Another mark of it’s torturous experience, though I didn’t get a picture, was a sort of Iron Cross looking mark on random buildings in the former Ghetto areas indicating the location of a random street execution by German soldiers. But the shock of an wider unknown story came with a monument to Josef Pilsudski, leader of Poland after regaining independence in 1918. A giant full body statue stands outside of Lazienski Park where I was told he was the only Pole that Hitler ever truly feared. Hitler, it is said, delayed his Polish invasion until Pilsudski passed away and “respected” Pilsudski enough that he even attended his state funeral in 1935. 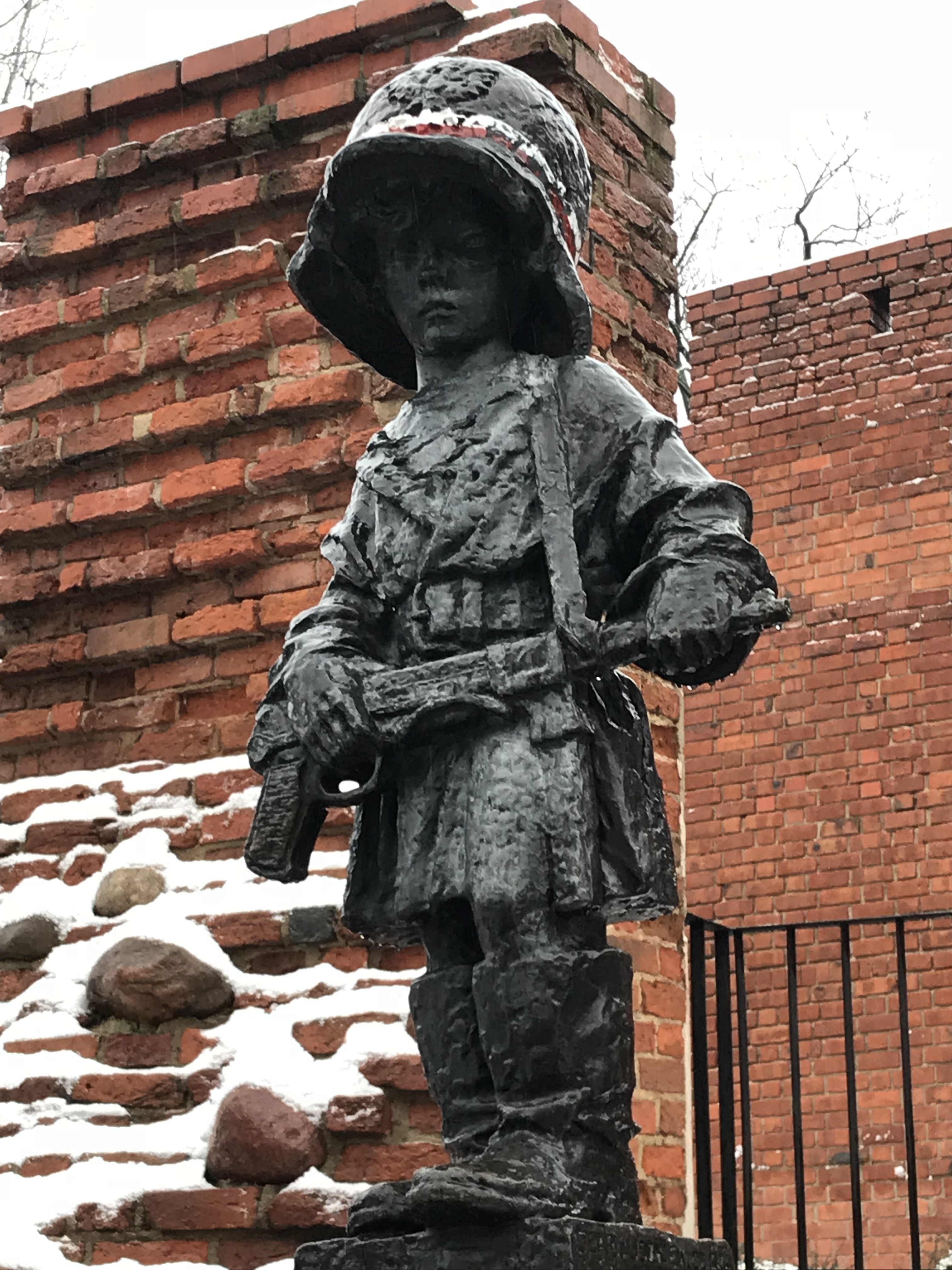 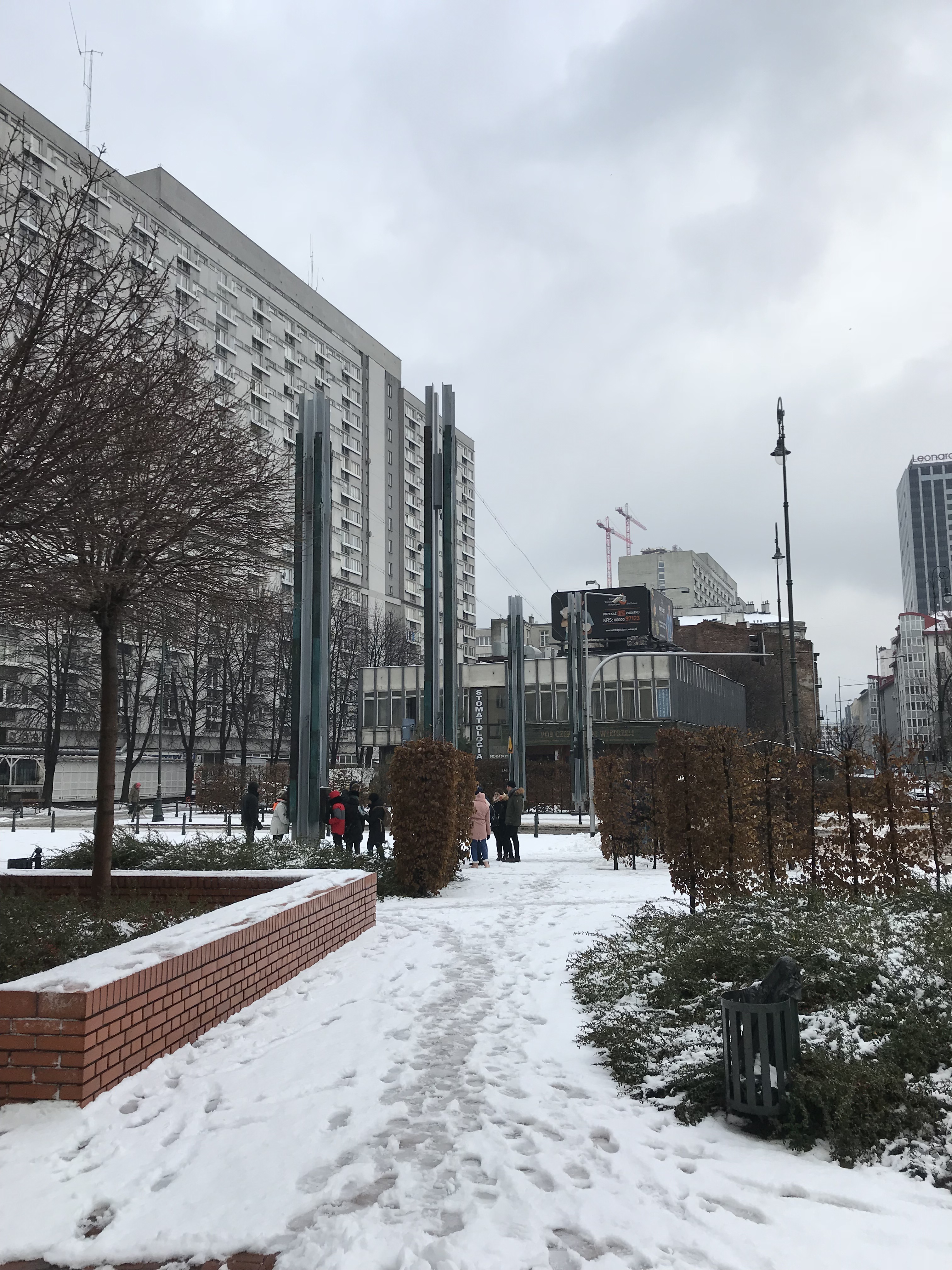 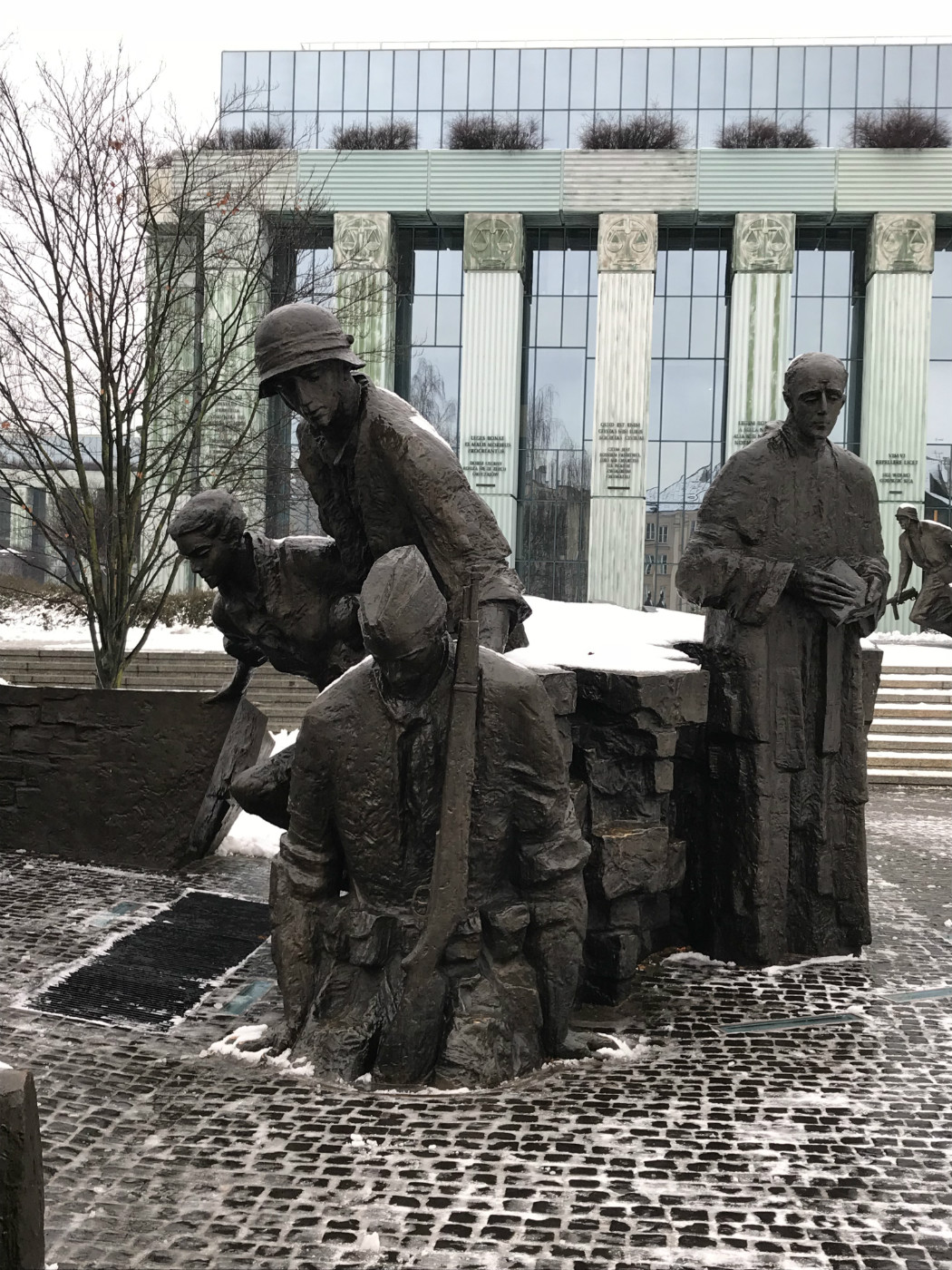 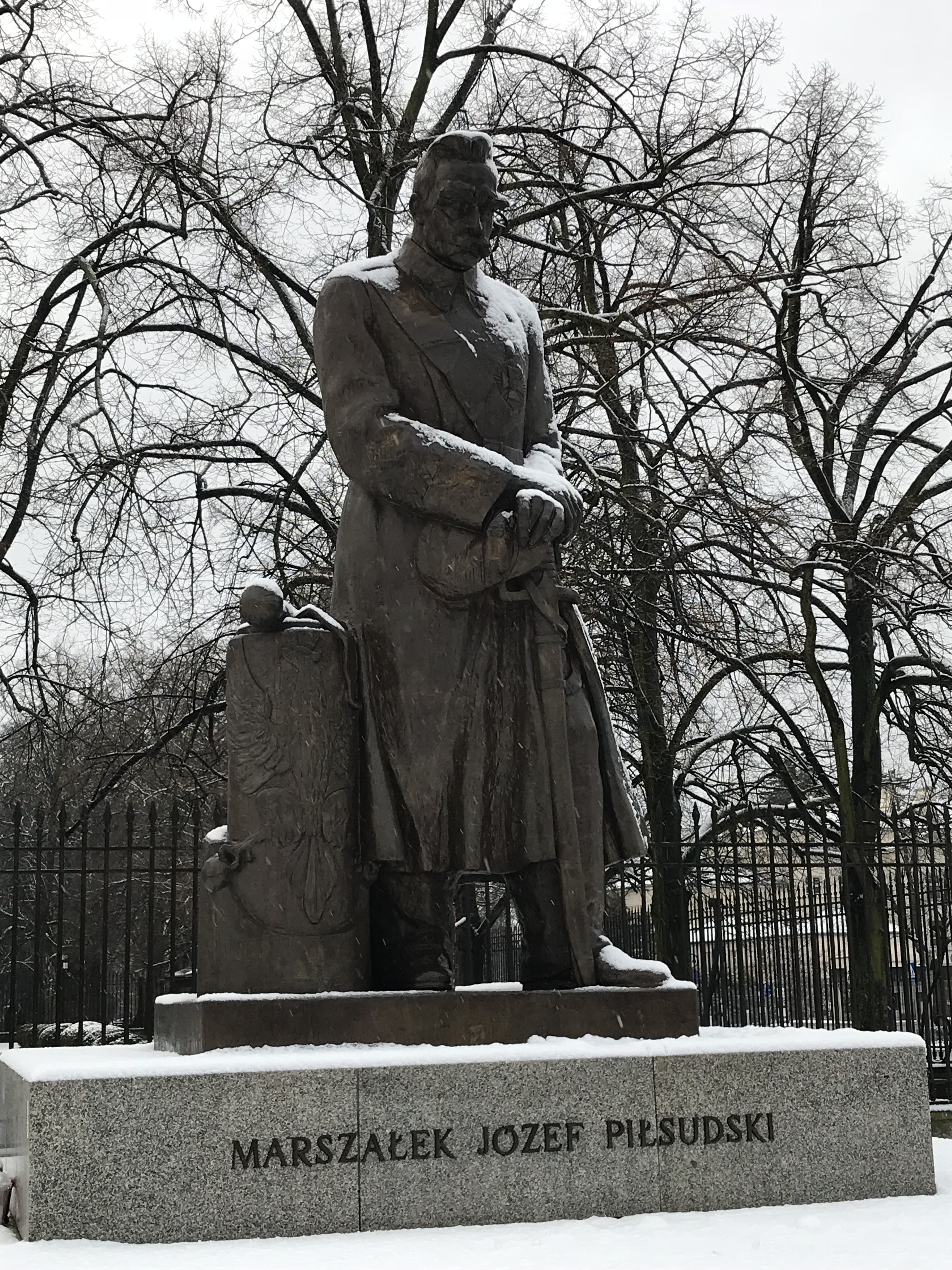 Gdynia, right outside of Gdansk,  is home to the most famous battleship of the Polish navy, which managed to escape to Britain and fight in WW2’s Battle of the Atlantic, the Destroyer Blyskawica. I’d see a bronze scale model near the ship and would later see the same type of model at the Solidarity Center in Gdansk, the Cathedral of John the Baptist in Wroclaw, and Wawel Castle in Krakow. Seeing the model in Krakow, I’d make the remark that I saw something similar in Gdansk; my guide told me that with grant money from the EU and Norway, the country had taken their European Heritage monuments and made the scale models for the visually impaired to give them a tactile representation of the landmark; I was amazed at this effort in inclusivity, having never seen such an accessibility project before. Outside of the Old Town, in the canal was the transport ship Soldek, now a museum of maritime history. The ship was named after a shipyard worker who outperformed the rest of the workers in the age of Communist production quotas. His reward “for screwing the most bolts in the hull during it’s construction was to have the ship named after him.” With Gdansk having also a varied history with shifting country boundaries and political treaty concessions, the city has a multicultural feel. It shifted back and forth between Poland and Prussia between the partitions and was established as a free city, not quite unlike Singapore, after World War 1, as the free city of Danzig. With Poland being a predominantly Catholic country, yet Gdansk being a German city for so long, churches like St. Mary’s Cathedral in the Old Town were Lutheran for part of it’s history and became Catholic. St. Mary’s itself took over 150 years to complete construction and after the church became Catholic they built a small church for the Lutheran priests next to the cathedral to continue practicing and not lose rights to the cathedral.

Krakow totally changed my perception of Polish history, it’s character, and it’s resolve in it’s efforts to steer history. I had always associated Krakow with the Auschwitz concentration camp because it was always the #1 advertised tour in the city, yet, come to find out the camp was 3 hours away. The city had it’s character in it’s role as the ancestral capital of the Polish Kingdom before Swedish born rulers moved the capital to Warsaw, to be closer to the Baltic and Stockholm. Wawel Castle was a treasure trove of history with the great kings of Poland buried in the Cathedral of Sts. Stanislaus and Wenceslaus and the legend of the Wawel Dragon. The dragon was said to live under the castle, terrorized the citizens, and had a fondness for eating young maidens. When the king’s knights all failed to slay the dragon, a cobbler’s apprentice offered to give it a shot and filled a calf’s leg with sulfur and placed it outside the dragon’s lair. After eating it, the sulfur made the dragon so thirsty it crawled to the Vistula River and drank until it burst. Outside the lair is a sculpture of a dragon where I was told you could see it breath fire on occasion but after several minutes no fire came so my guide and I left both bummed. Walking through the Old Jewish Quarter I saw where some scenes from Steven Spielberg’s “Schindler’s List” were filmed and walked past a bronze sculpture outside a synagogue of a man sitting on a bench. I was told it was Jan Karski, a Polish Military Intelligence officer, who took reports to the Allies detailing the Holocaust in the concentration camps but his reports were believed as false. That story gave context to the video from my first article where it says, “We were the first to alert the world of the Holocaust but no one listened to us.” Now, hearing that in person made it all too surreal. The Cathedral of St. Mary in the city’s main square had an interesting story as the building, itself. Entering the main square I saw a knife dangling from a chain above a corridor, the knife is attached to a legend about the brothers who built the towers of the cathedral. One became jealous of the other as his tower was being built faster and could be bigger than the other, that he stabbed and killed him; feeling remorse, however, upon completion of his tower, the murderer jumped from the belfry to his death. The cathedral now is known for the bugle call played by a group of local firemen every hour after the bugle call was first made to announce the opening/closing of the city gates and invasion alerts in the 13th century. The statue of a gentleman on horseback was a fun moment outside Wawel Castle, as I was taught about General Tadeusz Kosciuszko and his military service in the American Revolution against the British. It is said, when President Lech Walesa met with President Bill Clinton in the 1990s, he asked for two US Generals in trade for all that Kosciuszko did for the new nation. Clinton was unsure on how to answer, however, because President Walesa asked for “General Motors and General Electric,” in a bid to get economic investment for the newly free nation.

Wroclaw (pronounced Vros-lav) is the capital of the Lower Silesia region and had only a few things that I could grab on to for stories but they were just intriguing as the others. The Church of Peace in Swidnica is entirely built of clay, wood and straw as the Roman Catholic Empire of Austria wouldn’t allow Lutheran citizens in the area to build a church with any hardened materials that might make it a military fortification should there be an uprising. The photo from inside a cave is a mystery as little to nothing is known about what is called Project Riese. Project Riese was a German secret during WW2 but no records were ever kept by Nazi Administrators and prison camp laborers’ stories can’t be corroborated because of the known conditions of prison camp life (lack of nutrition, poor health) and working conditions (the tunnels were dug by oil lamp light). Any survivor stories can be only believed so much, as time and resources would have been spent elsewhere than trying to remember what the Nazis were doing in the tunnels. What is known is that the Nazis refused to abandon the tunnels until 1945 when the war ended which begs the question, “What WERE they doing that they didn’t leave until the very end?”.  The gnomes of Wroclaw have a folklore characteristic within the city now, as they represent the Orange Alternative from the 1980s. The Orange Alternative was an anti-communist movement that started in the city, akin to Solidarity in Gdansk, however they were more creative and flamboyant in their protests. One protest I heard about involved members walking around the city on a hot summer day wearing their orange gnome hats and shirts with letters on them “to protest the weather,” though if you removed a certain letter from the lineup, the slogan went from “Down with the hot weather,” to “Down with the Dickheads.” When police were noticed approaching to shut down the protest, the missing member would pop out from behind the line to take his appropriate place. They would tell the police they wanted to protest the weather but the missing “letter” was late arriving. When the police walked away, the letter would disappear again to make the slogan anti-government once more. So now, anywhere you go in the city you may find a gnome chilling on a beach chair, singing, or even playing golf with his buddies. 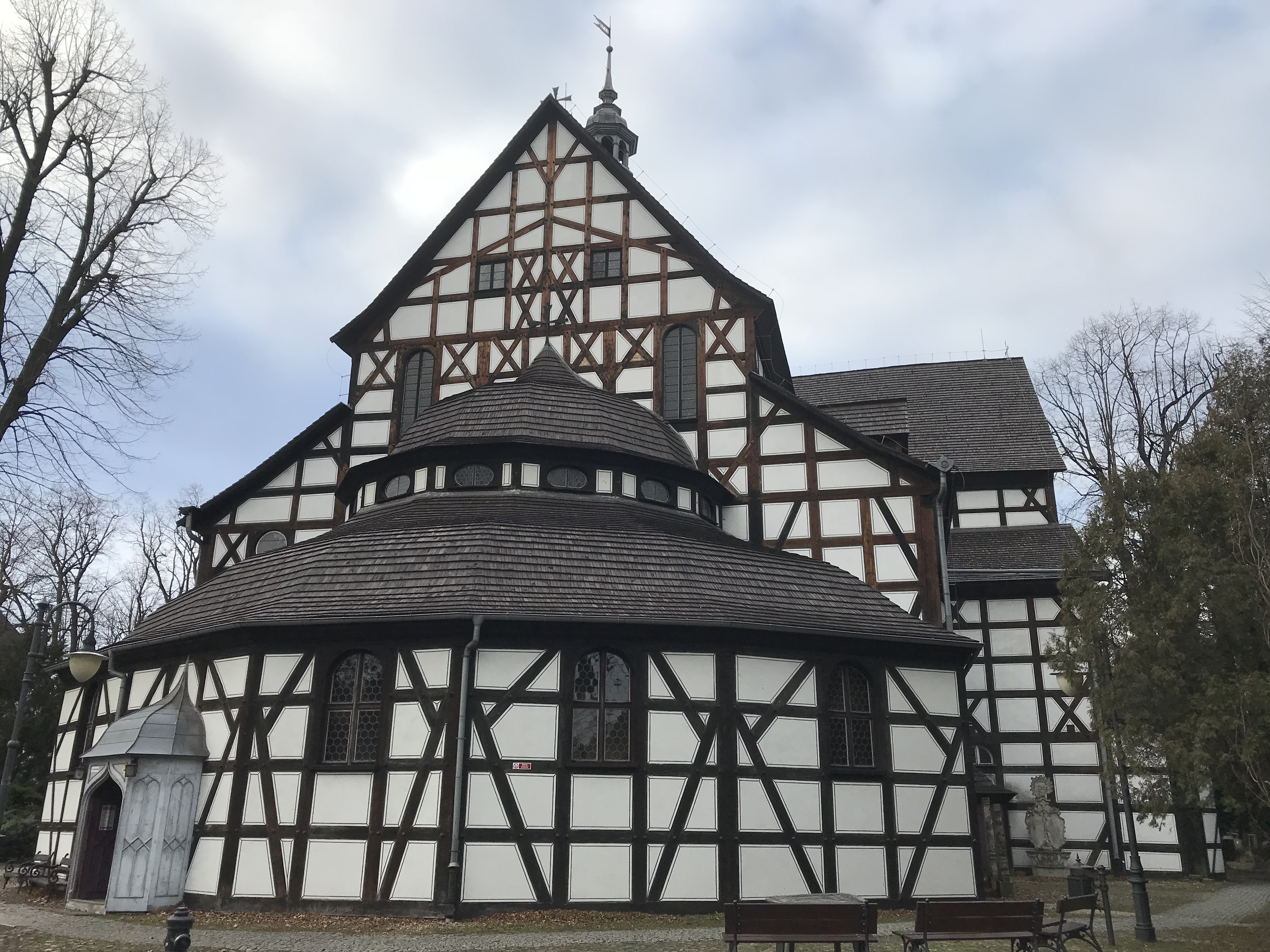